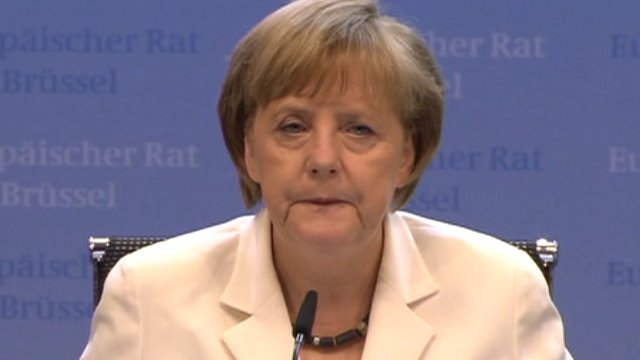 Cannot play media. You do not have the correct version of the flash player. Download the correct version
Advertisement
Angela Merkel: "The details affecting liability... will have to be discussed... those negotiations are going to be anything but easy"

"I think we found a good compromise," she said after all-night talks which saw her come under heavy pressure from Italy and Spain.

A new supervisory body will enable the European Central Bank (ECB) to "keep a very close eye on the banks", she said.

Spain is awaiting a 100bn-euro (£80bn; $125bn) recapitalisation of its troubled banks by the eurozone.

Mrs Merkel said the deal on lending would provide sufficient safeguards for the taxpayers' money used by the EU bailout funds.

The German Bundestag, the lower house of parliament, later approved the deal by a huge margin, with 491 votes for and 111 against. The upper house is expected to follow suit.


The EU's existing bailout fund - the European Financial Stability Facility - will provide aid under the current rules until the new permanent fund, the European Stability Mechanism (ESM), is ready to take over. The ESM is due to be launched next month.

The funds will not only be able to lend directly to banks. They will also be used to buy bonds of countries like Italy and Spain whose borrowing costs have soared - with the intention that those countries will not have to apply for a formal Greek-style bailout.

Eurozone leaders agreed to begin implementing the decisions by 9 July. However, it could take until the end of the year before the new money becomes available.

Germany, the biggest economic power in the eurozone, is reluctant to continue bailing out debt-laden countries. Its position is supported by the Netherlands, Austria and Finland.
Breaking 'vicious circle'
Announcing the deal, EU Council President Herman Van Rompuy said it would break the "vicious circle" between banks and national governments.

The euro surged against other currencies while European stock markets also rose sharply.

US markets also rose significantly. The Dow Jones industrial average was up 1.75%.

The BBC's Andrew Walker, in Brussels, says the new loans will not be given "seniority" over private sector loans.

This means that if Spain were to default, those official lenders would not get preferential treatment. The move should make Spanish government debt a little more attractive to private investors, our correspondent says.
Growth stimulus

The growth package, including a funding boost for the European Investment Bank, was later agreed.

The leaders also approved a roadmap for building a more integrated eurozone - what should eventually become a fiscal union. It includes controversial plans for "eurobonds" - mutualisation of eurozone debt.

Mrs Merkel has resisted the idea of pooling eurozone debt. On Friday she said "details about liability will have to be discussed by the finance ministers and those negotiations will be anything but easy".

The deal came about after new French President Francois Hollande appeared to throw his weight behind Italy and Spain.

The US welcomed the deal as "encouraging" but said details still had to be worked out and further steps could be necessary.

"We welcome the indications that euro area leaders made progress last night as they grapple with these challenges," said White House spokesman Jay Carney.


Do you live in the eurozone? What do you think of the growth package? Let us know where you live and how the current economic situation is affecting your life: