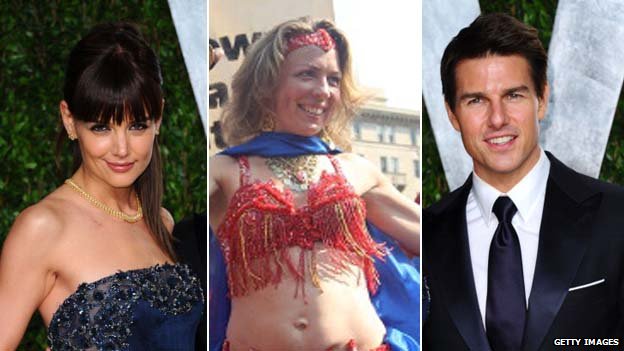 Katie Holmes, a Bellydancer protesting for a single-payer healthcare system, and Tom Cruise

For the week of 24 June, here is the news - condensed into 10 topical tweets, some more serious than others.

1. Egyptian election committee must be the only men alive who care this much about foreplay

Danish/Lebanese journalist Helen Hajjaj (@DKHajjaj) commented on the lengthy prologue before the committee announced the results of the Egyptian presidential election.

3. AP says it's upheld, CNN says it's not. HOORAY WE ALL WIN

Buzzfeed.com sports editor Kevin Lincoln (@KTLincoln) after CNN and Fox News initially reported that the Supreme Court had struck down the contentious individual mandate of the healthcare law.

4. Today is going to be such an awesome episode of "The Newsroom" in 2 years.

Sports writer Bill Simmons (@sportsguy33) wonders how the healthcare decision will play out on Aaron Sorkin's new show, which is set in the recent past.

5. Who is having a worse day Republicans, Ann Curry or CNN?

Political daughter Megan McCain (@McCainBlogette) reflects on Thursday's events, in which the healthcare law was upheld, Curry left her anchor position on NBC's Today Show, and CNN had to issue a correction.

6. What a relief. Now i can do my bath salts and not worry about impending face hunger

Rapper Earl Sweatshirt (@earlxsweat) after toxicology reports showed that the "Miami zombie" was not under the influence of a drug called bath salts when he ate part of a homeless person's face.

7. This is great news for Andy Murray - he can now lose in the final, rather than the semi ‬

The Daily Mirror's Football account (@MirrorFootball) is excited for Scotsman Murray's prospects now that Rafael Nadal has been eliminated from Wimbledon.

9. For $650 billion in bailouts, you'd think Germany could have extracted Italian and Spanish forfeits in Euro 2012‬

10. I can't believe Tom Cruise and Katie Holmes are getting divorced. Who will get custody of the Body Thetans?‪

Comedian Warren Holstein (@WarrenHolstein) on the dissolving nuptials of the Scientology power couple.

Some tweets have been edited for clarity