Stocks deep in the red 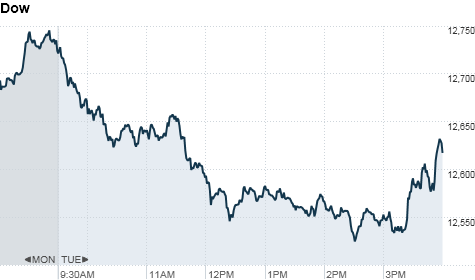 Click for more market data.
NEW YORK (CNNMoney) -- U.S. stocks fell sharply Tuesday, with the Dow suffering a triple-digit decline for a third session, on a combination of gloomy factors.
However, the market recovered some ground just before the closing bell after a report in the Wall Street Journal suggested the Federal Reserve may be moving toward more simulative monetary policies.
The outlook for U.S. economic growth has dimmed amid a recent spate of disappointing reports, including weak manufacturing data from the Richmond Federal Reserve Tuesday.
While investors have found some solace in corporate earnings and sales data, the latest quarterly results from Corporate America were uninspiring.
As if that were not enough, Europe continues to be a major source of concern, with renewed worries about Greece at a time when Spain and Italy are running into trouble.
The Dow Jones industrial average (INDU) dropped 104 points, or 0.8%, to end at 12,617. Cisco (CSCO, Fortune 500) was the biggest laggard on the Dow, a day after the network equipment maker said it planned to cut 1,300 jobs, or about 2% of its global workforce. Shares of Cisco were down nearly 6% in mid-afternoon trading.
The S&P 500 (SPX) lost 12 points, or 0.9%, to 1,338. The Nasdaq (COMP) fell 27 points, or 0.9%, to 2,863.
AT&T (T, Fortune 500) was the second-biggest drag on the Dow. The mobile-service provider delivered higher-than-expected earnings but missed revenue forecasts, despite strong subscriber growth during the quarter.

Related: Greece: Here we go again
And then there's Greece. The so-called troika of representatives from the European Union, International Monetary Fund and European Central Bank are in Athens to determine whether the nation qualifies for its next installment of bailout money.
Meanwhile, European manufacturing activity remains sluggish. Activity continued to contract across the eurozone in July, while Germany's PMI fell to a three-year low.
Despite the gloom out of Europe and the United States, investors were slightly heartened by a pick-up in Chinese manufacturing activity. Early Tuesday, HSBC said its China Manufacturing Purchasing Managers' Index came in at 49.5 for July. While any reading below 50 indicates contraction, it is the highest number reported since February and shows significant improvement.

Fear & Greed Index
As investors continue to navigate through earnings, Europe's debt problems and a slow-moving global economy, Sheldon said markets will remain volatile through the summer.
"Investors remain hostage to decisions by policymakers in China, Europe and the United States," said Sheldon. "Until we get more clarity and bold action, trading is going to be choppy."

Related: Wall Street's hottest new investment: Your house
Economy: The Richmond Federal Reserve said manufacturing activity in the central-Atlantic region continued to contract in July, coming in at minus 17, the lowest level since April 2009.
The Federal Housing Finance Agency's Housing Price Index for May was up 3.7% from a year earlier.
The news followed a similarly bullish report from real estate listing site Zillow, which showed home prices rose for the first time in five years.
Companies: DeVry's (DV) stock tumbled 24%, making it the worst performer among the S&P 500, after the for-profit education provider warned that it would earn far less than what analysts had been expecting in the fourth quarter, citing a shortfall in revenue, rising costs and a one-time charge.
Rival Apollo Group (APOL), which operates the University of Phoenix, was also a big loser. JPMorgan lowered its stock price target on the company to $43 from $47.
Tex-Mex restaurant chain Chuy's (CHUY) was making a strong debut as a public company, a day after pricing its IPO at $13 a share -- at the top end of its estimated range. Shares rose about 18%.
Shares of Regions Financial (RF, Fortune 500) climbed after the company posted a second-quarter profit that more than tripled from a year earlier. The company was able to post robust results by slashing its provisions for bad loans by more than 90%.
Shares of Chinese Web-search company Baidu (BIDU) jumped a day after the company released quarterly earnings that beat expectations.
Currencies and commodities: The dollar rose against the euro and British pound, but lost ground versus the Japanese yen.
Oil for September delivery rose 60 cents to $88.74 a barrel.
Gold futures for August delivery fell $1.20 to settle at $1,576.20 an ounce.
Bonds: The price on the benchmark 10-year U.S. Treasury rose, pushing the yield down to 1.41% from 1.44% Monday.