49ers' Culliver under fire at Super Bowl for anti-gay remarks 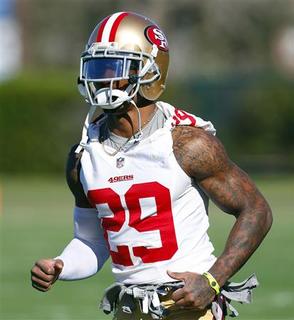 
Culliver came under fire for the comments he made this week on comedian Artie Lange's radio show but apologies from the player and National Football League team in statements late on Wednesday did little to diffuse the situation.


The issue, particularly sensitive for a 49ers team that is based in a community with a large gay population, dominated Thursday's pre-Super Bowl media activities.


The 24-year-old second-year cornerback, largely ignored by the media in previous sessions, faced a huge scrum of television cameras on Thursday and repeated the apologetic stance he had taken earlier in a written statement.


Asked about creating a distraction just days away from the Super Bowl showdown with the Baltimore Ravens in New Orleans, Culliver said: "I'm not trying to bring any distraction to the team. We're trying to win a Super Bowl."


49ers chief executive Jed York told reporters that the team would take Culliver at his word and help him learn from the gay community.


"I think Chris made some dumb, insensitive remarks. You have to understand, in context that you have a young kid who spoke to the media for an hour, he sort of got too comfortable and let something get out that wasn't truly how he felt," said York.


During the interview with Lange, Culliver said he would not want a gay teammate, that the 49ers did not have any gay players and that if they did those players should leave.


San Francisco head coach Jim Harbaugh said he had spoken to Culliver about the issue.


"We reject what he said. That's not something that reflects the way the organization feels, the way most of the players feel," he said. "I hope and pray that it affects him in a positive way going forward."


Harbaugh said he was sure the comments did not reflect the player's personality.


"I do believe that there wasn't malice in his heart; he's not that kind of person. He's not an ugly person; he's not a discriminating person."