Researchers shut down the extra chromosome responsible for Down's syndrome, paving the way for future treatments 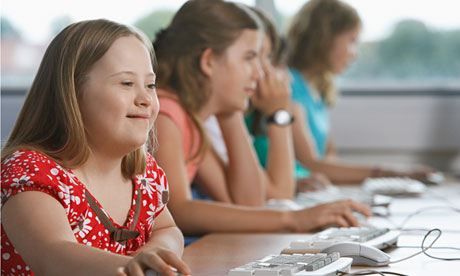 People with Down's syndrome are at greater risk of heart defects, leukaemia and early-onset dementia. Photograph: Getty Images
Scientists have corrected the genetic fault that causes Down's syndrome – albeit in isolated cells – raising the prospect of a radical therapy for the disorder.
In an elegant series of experiments, US researchers took cells from people with DS and silenced the extra chromosome that causes the condition. A treatment based on the work remains a distant hope, but scientists in the field said the feat was the first major step towards a "chromosome therapy" for Down's syndrome.
"This is a real technical breakthrough. It opens up whole new avenues of research," said Elizabeth Fisher, professor of neurogenetics at UCL, who was not involved in the study. "This is really the first sniff we've had of anything to do with gene therapy for Down's syndrome."
Around 750 babies are born with DS in Britain each year while globally between one in a 1000 and one in 1100 births are DS babies. Most experience learning difficulties.
Despite advances in medical care that allow most to live well into middle age, those who have the disorder are at risk of heart defects, bowel and blood disorders, and thyroid problems.
Though a full treatment is still many years off, the work will drive the search for therapies that improve common symptoms of DS, from immune and gastrointestinal problems, to childhood leukaemia and early-onset dementia.
"This will accelerate our understanding of the cellular defects in Down's syndrome and whether they can be treated with certain drugs," said Jeanne Lawrence, who led the team at the University of Massachusetts.
"The long-range possibility – and it's an uncertain possibility – is a chromosome therapy for Down's syndrome. But that is 10 years or more away. I don't want to get people's hopes up."
In a healthy person, almost every cell in the body carries 23 pairs of chromosomes, which hold nearly all of the genes needed for human life. But glitches in the early embryo can sometimes leave babies with too many chromosomes. Down's syndrome arises when cells have an extra copy of chromosome 21.
Lawrence's team used "genome editing", a procedure that allows DNA to be cut and pasted, to drop a gene called XIST into the extra chromosome in cells taken from people with Down's syndrome.
Once in place, the gene caused a buildup of a version of a molecule called RNA, which coated the extra chromosome and ultimately shut it down.
Previous studies found that the XIST gene is crucial for normal human development. Sex is determined by the combination of X and Y chromosomes a person inherits: men are XY, and women are XX. The XIST gene sits on the X chromosome, but is only active in women. When it switches on, it silences the second X chromosome.
Lawrence's work shows that the gene can shut down other chromosomes too, a finding that paves the way for treating a range of other "trisomy" disorders, such as Edward syndrome and Patau syndrome, caused by extra copies of chromosomes 18 and 13 respectively.
Writing in the journal Nature, the team describes how cells corrected for an extra chromosome 21 grew better, and developed more swiftly into early-stage brain cells. The work, the researchers write, "surmounts the major first step towards potential development of chromosome therapy".
The work is already helping scientists to tease apart how an extra chromosome 21 causes a raft of problems that strike people with Down's syndrome at various ages. "By the time people with Down's syndrome are in their 60s, about 60% will succumb to dementia. One question is, if we could turn off the extra chromosome in adults, would that stop or ameliorate their dementia?" said Fisher. Another approach would cut the risk of leukaemia by silencing the extra chromosome in bone marrow cells.
The US team has already begun work that aims to prevent Down's syndrome in mice, by silencing the extra chromosome 21 in early-stage embryos. "That would correct the whole mouse, but it's not really practical in humans," said Lawrence.
A chromosome therapy for humans would be fraught with practical and ethical difficulties. To prevent Down's syndrome, the genome editing would have to be performed on an embryo or foetus in the womb, and correct most, if not all, of the future child's cells. That is far beyond what is possible, or allowed, today.