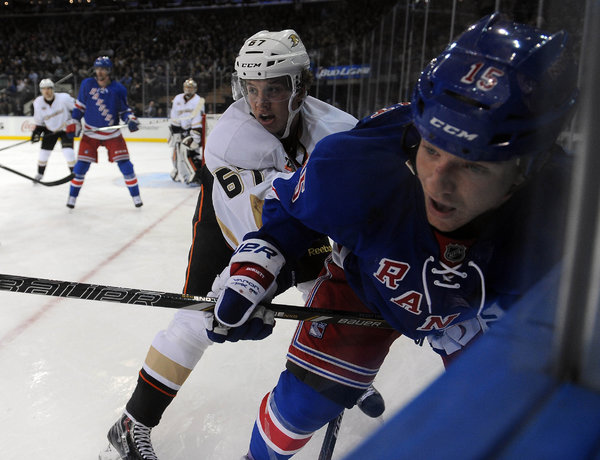 
Visions of a four-game winning streak vanished as Corey Perry and Kyle Palmieri scored first-period goals and the rookie goaltender Frederik Andersen made 32 saves as the Ducks beat the Rangers, 2-1.
The Rangers (6-8) dominated the Carolina Hurricanes on Saturday for their third straight win, but a different team in blue skated against the larger, speedier Ducks, who improved to 12-3-1 to lead the Pacific Division. The conclusion to their journey with a 5-2-1 mark left Ducks Coach Bruce Boudreau gratified.
“It’s a tough grind but to finish with a win like this, I can be nothing but proud,” Boudreau said. “Our young goaltender made a couple of ten-bell saves and played a really solid game. Even when the Rangers scored, it was just water off a duck’s back. He was calm and cool the rest of the way.”Anaheim routed the Rangers, 6-0, at home on Oct. 10 while the Rangers were in the midst of a season-opening nine-game trip.
Perry opened the scoring at 2 minutes 29 seconds, whipping the puck past Henrik Lundqvist after Derick Brassard gave the puck away in the Rangers’ zone. Assists went to Perry’s linemate Dustin Penner and defenseman Luca Sbisa, who was making his season debut for Anaheim.
The goal was the team-leading ninth of the season for Perry, a 28-year-old right wing who won the Hart Trophy as the most valuable player in 2010-11, when he led the N.H.L. with 50 goals.
“They’re so fast at turning mistakes into scoring chances,” Lundqvist said. “That’s why they’re a top team.”
Palmieri, who grew up a Ranger fan in Montvale, N.J., idolizing Mark Messier and Adam Graves, scored his fourth of the season at 9:09 with an assist to Francois Beauchemin.
“It was special for me, that’s for sure,” said the 22-year-old Palmieri, who had about 30 family and friends at his Garden game.
Michael Del Zotto finally solved Andersen at 18:36 of the second after the goaltender could not handle a loose puck in the crease. The puck made its way in the slot to Del Zotto, who shot it past a prone Andersen for his first goal of the season.
Carl Hagelin and the captain Ryan Callahan — who returned to the lineup after missing seven games with a broken thumb — assisted on the goal.
The 24-year-old Andersen was making his third N.H.L. start for the Ducks in place of their No. 1 goaltender, Jonas Hiller. Anaheim’s regular backup, Viktor Fasth, is recovering from a lower-body injury. Andersen improved to 4-0, having won his first appearance in relief of Hiller.
Andersen, a 6-foot-4 Dane who was recalled from Norfolk of the American Hockey League on Oct. 18, was a third-round draft pick by Anaheim in 2012 after a strong season in Sweden for Frolunda, the same club that Lundqvist starred with before joining the Rangers in 2005.
“I wasn’t nervous, there was no time for that,” Andersen said.
Andersen made perhaps his strongest stop on a one-timer by center Derek Stepan late in the first. He also made two successive saves on defenseman Ryan McDonagh with six minutes left in the third and another on Benoit Pouliot at the 14:43 mark of the final period.
JETS 4, RED WINGS 2 Matt Halishuck scored the winner as host Winnipeg snapped a three-game losing streak with a win over Detroit. (AP)